John Carpenter’s The Ward (2010) is something of a minor masterpiece, or at least a minor great film.

To a degree almost apologetic, what vocal minority there was who approved this film did so by calling it traditional, while the majority of critics and filmgoers dismissed it as tired and cliché. The latter sentiment is not hard to understand. No doubt, scenes of lurking, undead menace, teenage girl murder and various jump-scares feel as if they’ve been trucked in from the stock warehouse of horror cinema from the past 30 years-plus, while the similar themed psychological thriller Shutter Island had already recently stole much of the thunder on the idea of a split/multiple personality twist reveal. However, these aforesaid gimmicks of the film shouldn’t be considered its main draw; they are but a formality. The devil is in the details, as they say, and while The Ward never breaks new grounds in the horror genre, it nonetheless stakes a few acres of unclaimed territory in how its garden-variety premise is appropriated and ultimately subverted. Horror as a whole is a convention almost by necessity, and Carpenter’s gift has always been his ability to do something unique, something exclusive, within such an envelope precisely because he remains a thematic storyteller with a classical approach to onscreen artistry. Like all of his films, the key to really appreciating The Ward is rather simple: watch it again.

Madness is truly terrifying because it is real. Ghosts are not real. There are no haunted houses; no such thing as vampires or witches or werewolves or demonic possession etc. It’s all bullshit. Great for entertaining fiction, but bullshit. Yet, for all intents and purposes, madness of the mind is supernatural, or can pretty damn well evoke a similar effect. A real life person subject to insanity experiences the irrational, the unexplainable, in much the same way a scripted sane character would in your typical horror film. The Ward opens with this state of psychosis creeping about its edges. The nighttime establishing shot of a psychiatric hospital cuts to various empty hallways and corridors of its interior, and immediately there can be heard faint sounds of some inhuman growling or snarling emanating from somewhere nearby, perhaps behind the camera or not too far around some unseen corner. Right away the audience is experiencing what terrors the human mind is capable of. The sequence then finds its way inside a cell where a young girl cowers in fear before being snatched up and strangled to her death by a gruesome figure in the shadows, the first of many schlocky tropes involving said assailant that are actually clever in how they spin the film’s central conceit.

What follows is a rather nifty opening credits that montages a history of mental disorder with shattered glass imagery, and where composer Mark Kilian introduces his main orchestral theme involving chilly female vocals that wonderfully appropriates the "Carpenter sound" while still maintaining its own musical identity, not unlike Morricone’s contribution to The Thing. He follows up with an alternate, recurring motif of a childlike lullaby that echoes throughout the next scene leading into the film’s first act, one that depicts sunbaked rolling hills and a highway stretch of rural North Bend, Oregon, circa 1966, as a tattered Amber Heard darts through brown, dry, wooded areas, eluding a roaming police car and making her way to an abandoned farmhouse; feverish and distressed, she sets the farmhouse ablaze and falls to her knees before the cops show up and haul her away.

For Shutter Island, Martin Scorsese envisioned his asylum with strong, gothic overtones, as did Darren Arnofsky with his various urban settings in Black Swan (also released the same year), albeit modernized. Both directors displayed a considerable degree of influence via European cinema in how they hyper-stylized the psycho-traumatic descents of their respective protagonists: Scorsese, warping his surreal visuals in painterly slo-mo coupled with staccato assaults on the senses; Arnofsky, utilizing a grainy, handheld, 16mm vérité aesthetic for a near constant over-the-shoulder POV. In roughly the first 7 minutes of The Ward, however, and with scarce dialogue, Carpenter reframes from excessive style, opting instead for his signature low-key tone of unease: hypnotic opening credits that give way to a weirdly tinted countryside, which in turn conveys a subtle unreality even beyond the titular ward, accompanying our heroine, Kristen (Heard), no matter where she goes, and is the last time we see any other place on screen. Even the psychiatric hospital itself is less foreboding than it is merely clinical. This marks a similar vibe that goes all the way back to Halloween, where Carpenter feigns an unassuming normality of idyllic America as something to pervert with cold atmosphere.

As Kristen interacts with the four other girls of her ward, any number of tricky visuals could have been employed to signify the true nature of the circumstances, but Carpenter plays it cool with simple gestures in framing and camerawork. If not notably flashy, the director is always careful in how he illustrates the subjective view of a girl who suffers from multiple personalities. It’s a minimalist method that, instead of self-congratulating, pays off in favor of the audience, as numerous scenes of the five separate identities lounging about the rec room, a cafeteria table or strolling the outside courtyard are scanned with, sometimes tracking, master shots and measured coverage that invites us to interpret the physical logistics of what is, in fact, solo behavior. There are select instances when Carpenter does indeed augment or enhance this minimalism. One example involves a scene where the personality of goody two-shoes Iris, played by Lyndsy Fonseca, undergoes hypnotherapy by Jarred Harris, as the experimental Dr. Stringer, that cuts to a single, slow-zoom mental image of herself sitting on an outside bench as she turns and looks towards the camera; a singular exaggerated moment that is genuinely ominous, depicting a fork in the narrative where the mind decides, perhaps coaxingly, to destroy one of its own creations. Another example is the repeating, off-colored flashbacks to a prepubescent girl as the victim of sexual abuse.

Naturally, the movie is pockmarked with jolting frights as a murderous wraith torments Kristen from the peripherals and picks off the other girls one by one, killing them in a gruesome manner commonly associated with lowbrow slasher fare. In a more straightforward story lacking ambivalence between the innocent and the malevolent, these scenes could be considered rote to downright tedious, but here it is better to think of them as a kind of customary practice of horror fun that masks a deeper conflict between lunacy and a radical means to finding a psychiatric cure. The monster in question is revealed to be a disfigured form of Alice Hudson, the true identity of the girl from whom all the other identities have sprung. She herself was figuratively murdered by these divergents as a coping mechanism to avoid reliving her own traumatic past, while Kristen is revealed as the latest invention of this mechanism in its most extreme attempt to deny reality.

Therefore, the heart of the story bucks audiences’ sympathy in a way that is quite interesting, for Kristen is in fact the enemy, the film’s main antagonist, and yet she proceeds only with the most honest intentions. Within the storm of madness there is no axis dividing good and evil. For that matter, there is no good an evil; there are only opposing agents of the mind who fight to survive the real world either by embracing it or avoiding it. Crucial to this theme and the film’s overall counterintuitive nature is the casting of Heard in the lead. Blonde and alluringly beautiful, her open-faced sincerity accentuates a dreamy state that is beguilingly seductive. Kristen is the most naïve figment of Alice Hudson’s psyche, and there is an unshakable sadness to the idea that the former is but a victim in a victimless struggle for the latter’s sanity. A haunting moment comes near the end when Alice looks upon Kristen and the other girls as mere drawings in a sketch book, as lingering phantoms robbed of their own realities. A question arises: was Kristen any less valid -- her right any less deserved --in pursuing her own existence?

Carpenter provides no answers but he does end the film with his trademark closing 'sting' shot where Kristen, reduced to pure fury, attacks an unsuspecting Alice from behind a bathroom sink mirror. Justified or not, she aims to prove herself Darwinian champion of the mind.

With each viewing I’ve since become increasingly enamored with The Ward. It features a lean but astute script, ripe with penetrating themes, from Michael & Shawn Rasmussen, and each of the female cast members bring distinctive traits to their characters, even if those traits  are only surface-level, while Harris plays his role with just the right degree of ambiguity. All of the performances are rather thankless, really. But then, so is the movie as a whole, continuing the modest transparency of John Carpenter’s filmmaking craft. I can think of few other directors who are as consummate yet equally unassuming. 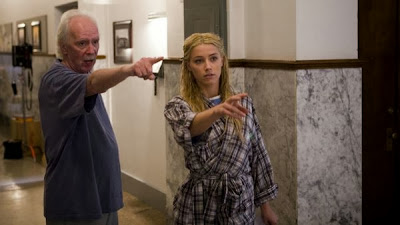