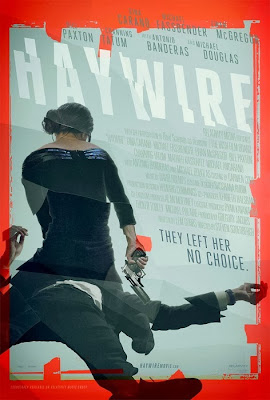 I enjoyed Haywire as a cool-breeze exercise in spy subgenre entertainment when I first saw it in theaters. Subsequent viewings have allowed me to better appreciate how Soderbergh experimented with his own auteur elements in tandem with said subgenre. More and more his work as a director reminds me of that classic 'falling hats' gag from Looney Tunes with Bugs Bunny and Elmer Fudd assuming the personalities of whichever style hat that lands on their heads.
The film’s basic setup and plotline is nothing new; we’ve seen it all before involving the rouge female agent running then counterattacking those who double crossed her. Cliché. But, again, I like the way (and the simple fact that) Soderbergh is tweaking both the genre and the cinematic conventions with which it’s so often associated. Like the Bourne films, this, too, features espionage amidst exotic European locales, but the tone and style are very different. Haywire is no grim affair. Business-like, yes, but also irreverent and coolly nonchalant. For example, Soderbergh supplants the routine and often drab spy-movie musical score, à la John Powell, with a series of upbeat jazzy riffs then further paces a covert mission montage and a foot chase to the same beats.

The fight scenes are unusual. Carano performs a number of elaborate martial arts techniques that are somehow weirdly, even surrealistically, understated by Soderbergh’s detached, borderline clinical presentation, cutting at most between two or three master-to-medium-master camera positions. We’re seeing a yin and yang of sorts: the extraordinary displayed in a manner of the ordinary; the latter not negating the former, but strangely complementing it. We hear the film on the same level as well. Its sound design feels not designed, but captured, documentric. Kicks and punches are acoustically muted. A car chase through snowy woods is heard not as the typical, articulated and over-layered multi-track array of engine accelerations and screeching metal, but as one would hear it sitting in the back seat of the cab. Shots fired and bullet impacts register as *pops* and *clinks*. I’ve read a lot of complaints online that all of these elements lessen the impact of the action but I personally think it has its own quality. I also think interesting Soderbergh's approach to the digital cinematography. Haywire is not a particularly "pretty" looking film, but the gauzy soft focus and the high contrast between shifting, heavy filtered color palettes -- as determined by different locations -- does make for some arresting imagery.
I almost get the sense that Soderbergh was aiming to create a kind of direct-to-video experience, only through calculation of the medium instead of limitation in budget or via simple lack of skill. In other words, he did it artfully, elevating a lowbrow form to something uniquely expressive. A lot of people seem to look past that at what they see as a mere cheaply made film of no consequence. Well, it may indeed be of no consequence -- an unassuming January release -- but I think it works with a genuine novel style nonetheless. I dig it.

﻿Gina Carano doesn’t appear to be all that great an actress. She doesn’t even have much screen presence in terms of personality. What she does exude, however, is a pure physical, able-bodied presence. She’s like a machine to a certain extent, and Soderbergh has effectively molded the film to her nature. His very choice in casting Carano is a clear echo of his casting porn star Sasha Grey in the lead role of The Girlfriend Experience. Centering the films on these non-actresses is intriguing in the way it challenges Soderbergh to construct storytelling as an extension of their occupations. Grey was a real life fuck toy playing the role of a socialite-specialty escort, an emotional toy for lonely corporate men seeking solace in the company of a perfect, always attentive female companion. Therapy porn.
Here, Carano is a real life MMA fighter who's playing a state-of-the-art, globally operational weapon. Grey’s character was largely internalized, reconciling the economic related stress of her fading clientele with her personal life/boyfriend, which resulted in numerous scenes of her sitting in rooms, deep in conversation, trying to make best sense of it all. Haywire is simpler in that Carano’s character is an external force with a purposeful resolve; ambushed by her handlers for mere profit, thereby justifiably pissed. Hers is a narrative almost entirely tactical: moving, fighting, evading, anticipating. Essentially, her character is her mission, whatever she is doing-pursuing from one scene to the next. And it works.

There’s also a kind of blandness to her countenance that is appropriate for the part. I dig how Carano is not some exotic waif like Jolie or Saldana or Beckinsale or any other female star in their respective action-heroine roles. Instead, she has this homegrown, common place attractiveness, while her impressive athletic bulk and remarkable utilitarian attributes is more than enough to hold the big screen. Given the right circumstances, I could watch her all day.

﻿
The surrounding cast lends the film much of its charming personality. Ewan McGregor is dastardly without being ridiculous. He’s snake oil personified, but without succumbing to a second rate Bond villain caricature. I like the way Michael Fassbender is depicted coldly in the first half of the film up until his death, then later through flashbacks conveys the slightest touch of humanity. That was a nice little narrative technique that allowed the audience to retrofit his character after the fact. Channing Tatum is a bit smarter and more likable than the usual dead weight that results from his casting. Bill Paxton does a fine job as the loyal and sympathetic father, and I really liked his brief moment of horror upon realizing just how deadly efficient of a soldier his daughter has become. Veteran Michael Douglas is good as the pragmatic and partially neutral government wise man and a laid back Antonio Banderas gets the funniest moment in the film; the crowd I saw it with gave a cheering laugh at his closing line.

Again, I enjoyed it. It really wasn’t the most dramatic action film in terms of story but the process was experimental and fun. The only thing is, I’m still not quite sure why it’s called "Haywire". Does it refer to something specific or is it just a title that Soderbergh thought sounded rad?